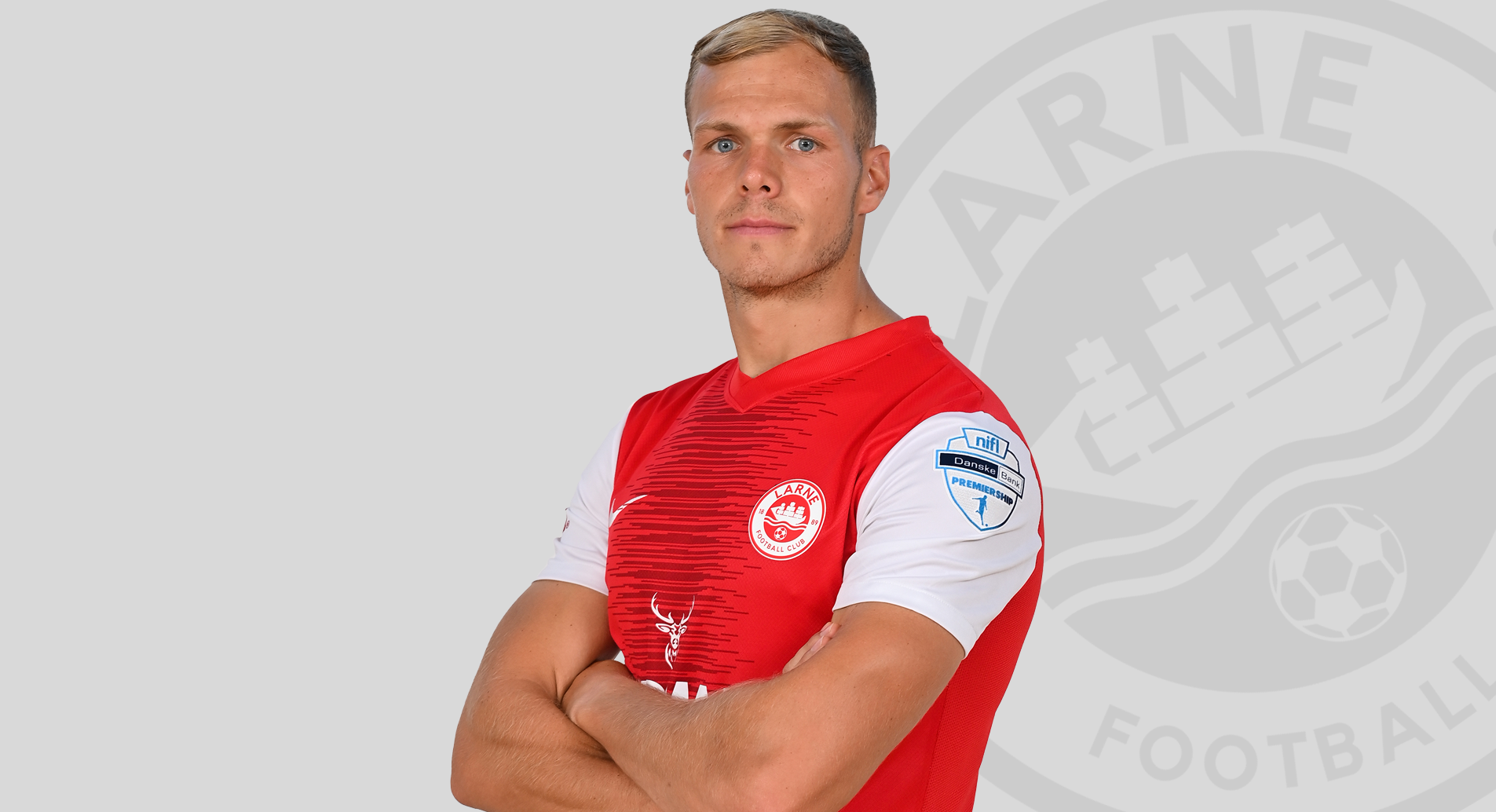 Leroy Millar was in the hotseat in this month’s Inver Read, our new monthly magazine, as our exclusive interviewee. Below you can take an exclusive look at what he had to say.

LARNE fans have discovered the many qualities of Leroy Millar during his first few months of life at Inver Park.

His swashbuckling performances in the middle of the park, goals, running power and strength have been at the heart of what has endeared the former Ballymena man to Larne fans. It has also helped to bring a new dynamic to a Larne team who, in the past, have been accused of not being do enough when the going got tough.

There is now another quality which can be added to the list: modesty. We when we sat down with the midfielder for this month’s edition of The Inver Read and put it to him that his performances in the first half of the season have earned him rave reviews from inside and outside the club, Millar was quick to deflect attention away from himself. In fact, he was more comfortable in talking about the ability of the players he has around him, than discuss his own start to the campaign.

“I don’t look into it too much to be honest,” he said when asked about the plaudits he’s received from pundits. “I’ve been doing ok, but that’s testament to the boys around me. They have made me look better than I’ve really been. “You’ve the likes of Mark Randall in there, Fudzer is unbelievable at breaking up the play and everyone around me makes me a better player. “We have a lot of quality in our side and that really helps.” As well as his own personal performances it has also been a hugely encouraging first half of the season for Larne as a collective. Top of the league coming into December, Tiernan Lynch’s men will be aiming to keep it that way as they head into 2023 with a trip to Solitude on the horizon as the first assignment of 2023.

When asked to assess the season to date, Millar is keen to point out that improvements can still be made. “We’ve had three defeats in there, so we’re disappointed with that, because you want to win every one of them,” he added. “You don’t win leagues in November or December, although you can certainly lose them by slipping too far behind at this point. “We like where we’re at, at the minute. We’ll just keep taking it a game at a time, because that has stood us in good stead so far.”

December presents some big challenges and some big ties to look forward to, including derbies with Carrick Rangers and his former club, Ballymena United. It has been well drilled into Millar not to keep focusing on the next assignment, however. He added: “You can never afford to look too far ahead. “Newry is the first home game in the month and that won’t be an easy game. They made it tough for us when we went down there.

“There are some big games coming up in the month, including some derby games thrown in, but we’re not going to look too far ahead because that’s when you become vulnerable to being caught out. “The next game is always your most important.”

Millar, 27, arrived at the club in June and, in the process, made the move from part-time to full-time football. Players often speak of the time it takes to get fully up to speed when making the change.

For those who watch Millar on a regular basis, that is not something you would guess he’s struggling with and he admits he is feeling the benefit as the months go along. “Each month I’m feeling fitter and stronger,” he said. “There’s the tactical side of it too, because I’m taking on a lot of information. Seamus, Gary Haveron and the Gaffer, as well as everyone else, have made me feel so welcome. “I feel like I’ve been here for ages and I’m absolutely loving it “The fans have been unbelievable all season and hopefully we can keep making them happy with what we’re doing on the park.

“There’s a lot to look forward to. “There’s the Shield final next month and we’ll worry about that when it comes along, but there’s a lot of football to be played before then. “Every game between now and the end of the season is going to be a cup final for us. We’ve half of the games to go now and we just want to keep chalking them off. “If we can do that then you never know where you’ll be come April or May.”

Larne kicked off December with an important 1-0 win at Glenavon as they got back to winning ways following successive defeats to Linfield and Coleraine. It also consolidated their position at the top of the table, but more important for Millar was showing the ability to bounce back after a setback.

“The main thing about the Glenavon game was all about getting the result,” he maintained. “You know what you’re going to get going there. They are a tough side to play against and you have a lot of back to front and a physical battle. It’s all about winning as many first and second balls as you can.

“We knew we had to bounce back though, because the last week of November wasn’t one of our better weeks with two defeats in a row, so it was important we bounced back going into the rest of December. “After those two games it was a case of back to basics and that means building on clean sheets.

“We have kept a lot of clean sheets this season and from one to eleven at Glenavon we showed a lot of desire to do that. “It was ugly at times, but the boys at the back were unbelievable. They had to deal with a lot of balls into the box.”

The Mourneview game at the start of the month also showed the importance of having substitutes who can come on and help to change a game, something not lost on Millar. He added: “I thought Daniel Kearns came on and helped to change the game at Glenavon “He did really well off the bench and you also had Jeff Hughes coming on in that game too and gave a really steady influence.

“People don’t need me to talk about Jeff Hughes and how good he is. He’s had an unbelievable career and is a class act. “He’s an unbelievable person to have in your squad and someone who can have a massive impact on a game, whether coming on or starting.”

The December edition of the Inver Read is available to buy HERE.