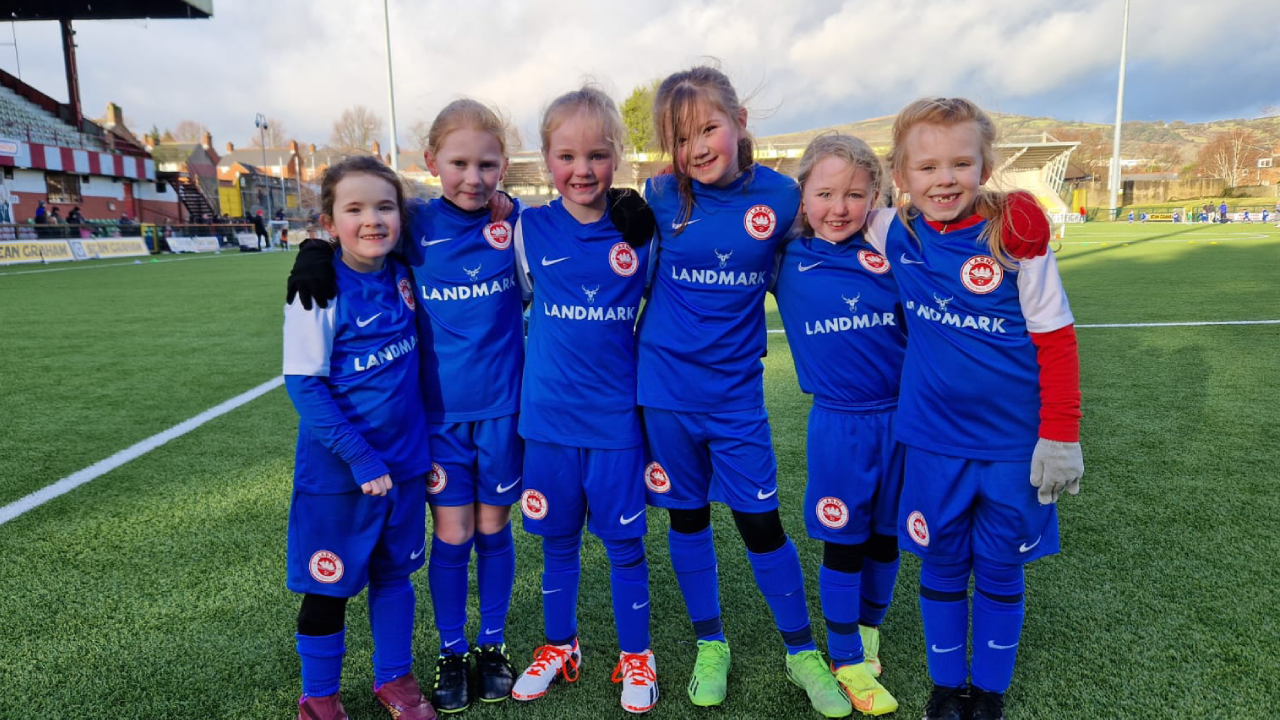 A friendly match for our newly formed U15 squad before the league starts, gelling the two groups of girls from our previous U14 squad and our 2008 girls – a real range of experience from some whom have played at U17 level for half a season to those who were playing only their second or third game of 11-a-side ever.

The Swifts started off strongly with but the girls came into their own, with their experience speed and skill from the get go. Dee Kenny got the score sheet with some fierce running down the wing. Mia O’Flaherty and Alix Wilson then found the back of the net.

Giving some other players a chance to show themselves, the team made some substitutions which left the second half in a stalemate. After some intervention by the Swifts coaches, it got the team rile up and firing on all cylinders.

Eimear Ward went on the attack firing a rocket that nearly took the net off with its power. The Swifts keeper must be congratulated for her ability as she made it hard work for the team, scoring some brilliant shots on target.

After that the girls were comfortable in the game, firmly finding their footing with Chloe Morrow and Clare McAleese also getting a goal for their effort.

As the team have been playing together for a few weeks, this is real promise with this team with all the girls looking forward to start of the league.

A friendly at Sandy Bay on Saturday to gel the 2012 squad which, for many of the team, was only their second game of 9-a-side against a team which beat us in early December.

Against a physically bigger side we battled well in the first half, but Barn scored an easy first goal after 15 minutes with a long ball over the top to a striker which ended with an easy finish 1-on-1 with our keeper.  Their second goal came from a bit of confusion near the box as well allowing them to slot home, but a 2-0 lead flattered the Barn team as the team were playing some good football.

After a long chat at half-time the girls came out much more aggressively. With plenty of opportunities to score, which were capitalised on by great goals from Mia Campbell and Amber O’Toole.

As the game went on Barn were defending frantically. To go from a defeat to a draw shows the massive improvement in the team, even against a strong tall side the girls really held their own.

With special mention to Bella McCambridge for her exceptional performance in defence, accompanied by some great tackling and passing throughout the game. For her work rate and running capabilities, Paisleigh Baird was superb from start to finish.

The girls began slowly, conceding some early goals. As the game went on the team settled in and put up a fight against the boys and matched them.

With goals from Megan McLean and a hattrick from Amelia Weir. Although it was a narrow defeat the girls can take on the experience from the game and go forward.

The girls enjoyed a win away to Solitude. With goals from every player on the team. Special mention to Eve Carmichael for her effort on the day.

From the get-go the team started strong on the attack. With an early goal from Eryn Wilson, the team just did not let up for the first half. Sofia Hamill was rewarded with a goal for her efforts.

Near the end of the first the half and the start of the second, the team took their foot of the pedals and gave Ballynagross a few chances, with our Macy Brennan did well to stop them scoring.

Battling hard on after the wakeup call the girls can take the win and know they gave it their all.

After fighting hard to hold possession in the second half the girls took the lead with a goal from Sophie Aiston. The girls kept the opposition under control with a strong defence and midfield to stop the Sky Blues in their track.

The second half had Larne in control, creating several chances, with Gemma Stranney getting on the score sheet.

With five minutes to go the girls let their guard down the opposition were able to get a goal.

It was great performance from the girls, with plenty of changes every girl was given plenty of game time and minutes on their legs.