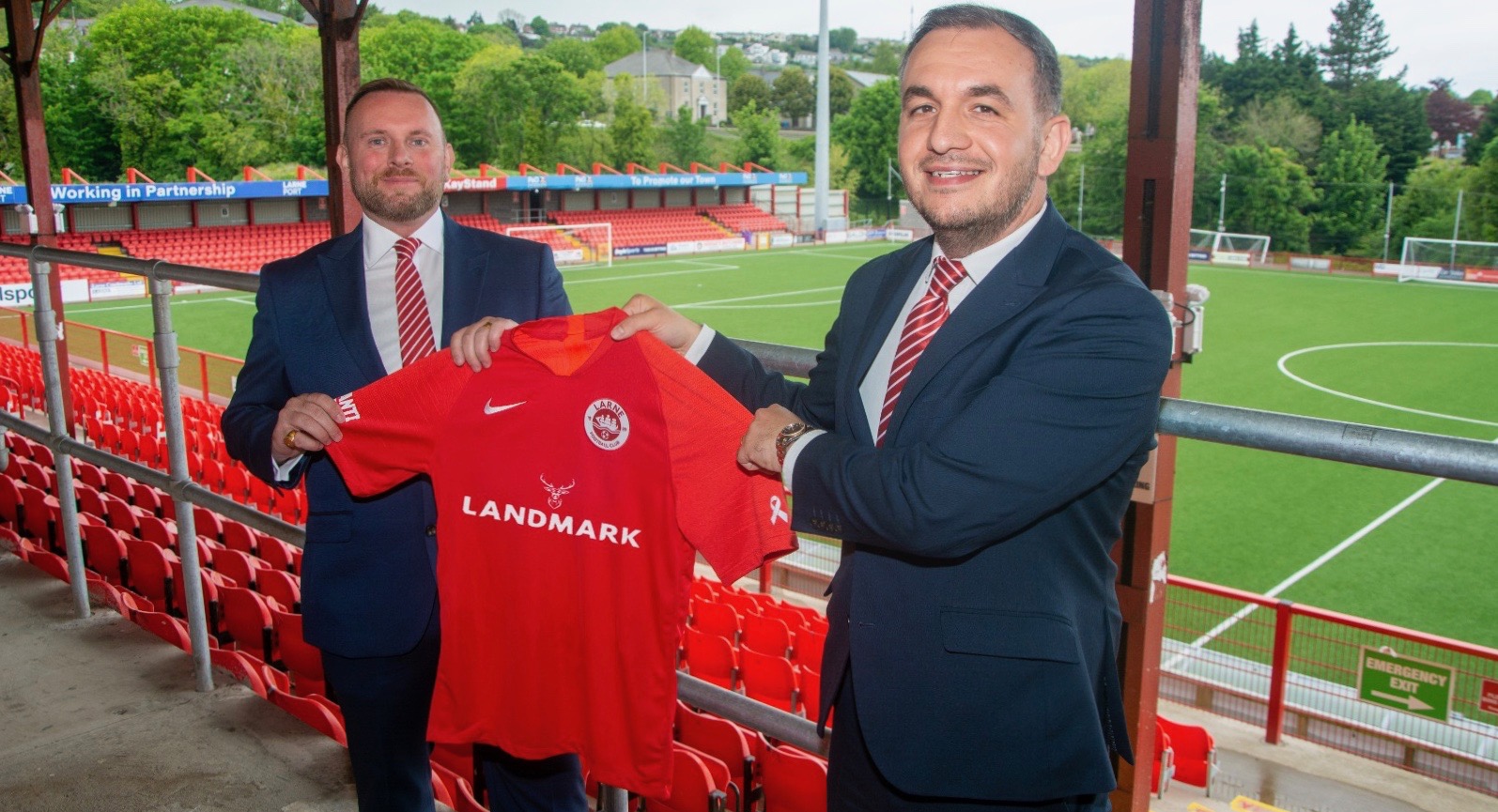 LARNE Football Club is delighted to announce Landmark as our new principal shirt sponsor for the next three years.

The London headquartered Insurance MGA (Managing General Agent), which operates across the globe and will have two new offices opening globally this year, will need no introduction to Larne fans following the company’s sponsorship of the Main Stand at Inver Park, throughout the past season.

The company, which was founded by Larne native Ross Lazaroo-Hood (Group CEO), has proudly displayed its branding across the stadium since the start of the 2020/21 campaign.

It will now adorn the front of every shirt – including all three playing strips – from this summer onwards.

That of course means the new partnership will make its first appearance in the club’s historic European debut, when we kick-off our UEFA Europa Conference League campaign on Thursday 8th July.

Ross Lazaroo-Hood (pictured above left), who has been following the Inver Reds from afar over the past number of years, is delighted to see Landmark’s involvement with his hometown club continue to grow.

He said: “We are all delighted at Landmark to be continuing our partnership with Larne Football Club after sponsoring the main stand and it being renamed “The Landmark Stand”.

“After this successful season, it is fabulous to now become the main Larne FC sponsors, which is a significant milestone for Landmark’s own achievements.

“We have met the Club many times this season and we value the many similarities in both our visions of working as a family. However, it is the fact that they are humbled by their successes and continue to strive wanting to see their Club flourish both in terms of football achievements as well as their charitable community projects.

“We look forward to be working with the Management team led by owner Kenny Bruce, Gareth Clements, Niall Curneen, their exceptional manager Tiernan Lynch – who has led the Club to winning the County Antrim Shield, to the Irish Cup final and victory in the European play-offs.

“Not forgetting of course all the players at the club who have work diligently hard over the last few years to bring the club to the heights that are so well deserved.

“The Larne fans are extremely passionate, they have seen their beloved club, established in 1889, develop under my childhood friend Kenny Bruce’s ownership.

“Like Kenny I have been a fan of the Club for many years and as a child of Larne town, who feels tremendous joy returning home and providing support through sponsorship into the heart of my own home town through Larne FC.

“The rebuild project of Larne FC is underpinned by the recent successes they have had which gives us at Landmark excitement for the next three years being the main sponsors of Larne FC and we look forward to engaging with the Club and their very important fans, as we deliver our own Insurance initiatives here in Northern Ireland and globally.”

He said:” I am absolutely thrilled to embark on the journey with this great club.

“I felt the passion and togetherness from the outset. The club has a fantastic team on and off the pitch.

“What the future holds is very exciting for everyone involved in the club and I hope we can share in historic moments and triumphs together with the club and their amazing fans.”

Larne chairman Gareth Clements is equally as delighted to welcome Landmark as our principal shirt sponsors for the next seasons.

“We have worked with Ross and Sitki over the last year and have built a very good working relationship over that time,” he said.

“They were keen to explore how they could further support the club and the principal shirt sponsorship was the one thing which really interested them.

“We’re delighted to have them with us for the next three years.

“Ross grew up in Seacourt along with Kenny Bruce, seeing what Kenny has done and what has been happening here and he wanted to help out as well. It’s the sort of thing which can only pay dividends for the club and the town.”