Herron and Watson pen contract extensions at the club 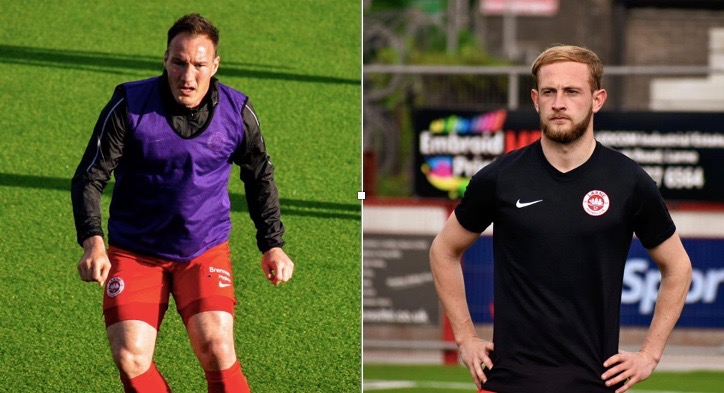 We are delighted to announce John Herron and Albert Watson have signed contract extensions at the club.

Both players were an ever present in the side which clinched European qualification for the first time in the club’s history, last season.

John, 27, arrived at the club from Glentoran in January 2020, with the Scotsman quickly establishing himself as an important cog in Tiernan Lynch’s midfield.

He has put pen to paper on a new three contract at the club, taking him through to the end of 2023/24 season.

“There was contact from clubs elsewhere during January, but I’m really happy here and see no reason to go anywhere else. I believe when you’re happy off the pitch that helps you to he happy on it and hopefully that can continue.

“It’s easy to come into this team and play the way the Gaffer wants us to play football and I really enjoy doing that with those around me, so it was a no brainer to commit to the club.”

Vice captain Albert, 35, has also been a mainstay of the team during his time at the club, showing every bit of the experience he has gained from his two decades in the game.

Having enjoyed a career where he has been successful within the Irish League, as well as playing professionally in Canada and Iceland, Albert’s 44 games last season is a reminder of just how much the veteran defender brings to the side.

He said: “I’m really pleased to be staying for my third season at Larne.

“I have really enjoyed my two years here so far and this is a club which is progressing year on year and we want to maintain that next season.

“Last season ended on a real high when we achieved our objective of European football. It was a long, hard season but also a good one. We were in both finals played last season, won the County Antrim Shield and moved up to fourth in the league.

“The aim is to keep moving in the right direction and see how far we can go.”