Haveron looks ahead to title decider 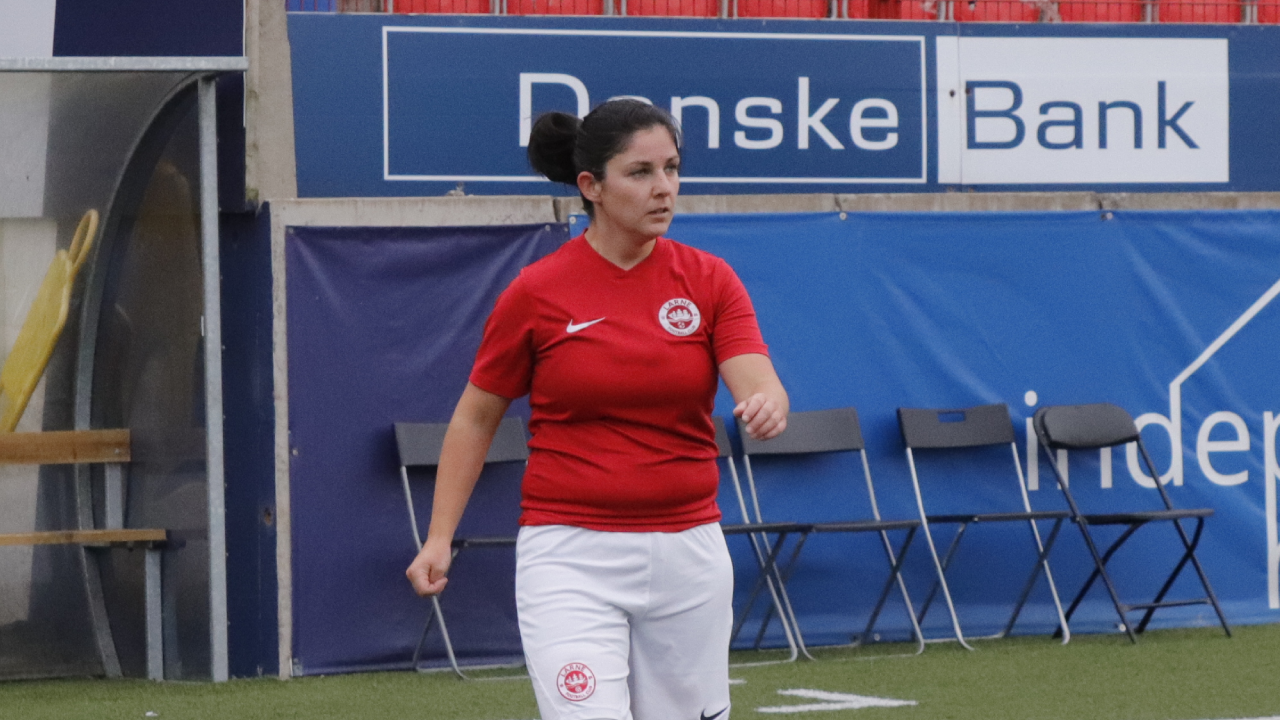 “The whole team is extremely excited, these types of matches only come around once.” Captain, Katherine Haveron sums up the thoughts of all of her teammates as Larne Women go into tonight’s title decider at Ballymena United.
The team already have promotion secured so come what may this evening, they will be playing Premiership football next season but as Haveron says “you want to go up as champions”.

It is an incredible climax to the season in that the two Shane’s Hill rivals sit level on not just points but goal difference and while the Sky Blues came out on top in a League Cup tie, the return league game at Inver Park finished 1-1 and the two teams could hardly have been more well-matched.

The Inver women have only lost one league game all season which was a 2-1 away reversal to Foyle Belles but when the side from the Maiden City came back to Inver, William Noble’s side brushed them aside 4-0. This was one of the recent results that the Larne number 5 says that she is most proud of the team for.

“Apart from Ballymena, the other sides we knew would be up there this season were Foyle and Ballymacash so to defeat them like that in the run-in was brilliant. The girls have really dug out some great results throughout the season to get us here.”
While Haveron emphasizes that all of the focus is rightly on tonight, this will not be the last game of the season for the Inver Women. They have an upcoming rearranged PWC Super Cup semi-final against the afore-mentioned Belles and an Electric Ireland Challenge Cup tie against Crusaders Strikers.

To be fighting on three fronts this late in the season is an incredible achievement that the centre-half has not taken for granted.
“In the past couple of seasons, while our league form has always been brilliant, we haven’t really been able to sustain a cup run so to be this far in two cups as well as promotion already secured is a credit to the girls.
We have been able to get strong sides out in the league and cup competitions.”

That tie against Crusaders is one that Haveron says is effectively a free shot and is pretty much the first time this season that the side will go into the game as underdogs but will be a marker for where the team will need to be in the Premiership next season.

“To be able to play a competitive game against one of the top Premiership sides will be a great learning curve for next season. We know the Crues will be wanting to progress so will put out a strong side so the girls will have more of an idea of what is to come week in week out next season.”

As for tonight, Haveron says “there’s a real fire in the girls for this one.” Part one of the Shane’s Hill Derby double-header this week is at 7:30 pm tonight at the Ballymena Showgrounds and Haveron, William Noble and all of the team and coaching staff are raring to go. The supporters’ bus leaves Inver Park at 6:30 pm tonight so get across the hill and support your team, your club, and your town!