Through the archives: Jim Hagan 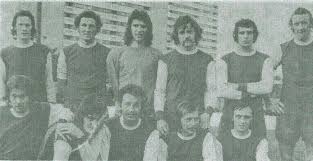 Irish League statistician, Marshall Gillespie asked on Twitter recently who local football fans thought was the best Irish League player never to have won an international cap. A popular answer was Jim Hagan. Ian Cahoon spoke to Jim for the matchday programme for the Glasgow Rangers friendly in October 2018.

Jim Hagan’s career took him to England, Spain, Sweden and the United States of America – but Inver Park has always been his footballing home.

Hagan was a cultured defender who proved he could adapt to a number of cultures, and it all began with Larne. In fact, he had no fewer than three spells as a player, one as a player/manager and one as assistant manager to Kenny Shiels. That coaching opportunity eventually led to a return to the managerial hot seat in its own right.

It’s an affinity with Inver Park that stretches back more than four decades and, while he now calls the south of Spain home, he is watching with great interest on everything that is unfolding at his old club.

For Jim, his connection with the club goes all the way back to the late 1960’s.

“I was a supporter first and foremost,” he explains.

“Every year my Father bought season tickets for us and we’d go to games.

“I can still remember him standing at the Church End, and those were the days when Larne were kingpins of ‘B’ Division.

“If felt like we won every game and there were some top players and characters in those teams. I remember the likes of Harry Rainey, who started off Windsor Rangers in the town and he went on to become a great goalscorer for his home town.

“Tommy Andrews was putting the reserve team together and he would have known a lot of us young lads, who went down to play football at Sandy Bay virtually every day.

“So I stated off by playing for the Olympic and then managed to break into first team at around 17. I was thrown into the deep end, but that’s the way I still feel is the best form of development.

“I know you cant do it with a whole team, but if players are good enough then playing them in the senior team is the best way to develop them. Look at the young lads who had a few years in Irish League before they went to England, and have had very successful careers

“Gareth McAuley is a prime example when you think of tonight’s opposition, and you look at Mal Donaghy who was here and then went to England in his 20s. It is a great grounding for players, toughens them up and prepares them for the professional game so often.”

Jim might well have broken into the first team at Inver Park at a tender age, but it wasn’t long before he showed his class. The only regret he has before his move to Coventry City in 1977 was that he never got the chance to play in an Irish Cup final with the club.

“The crowds were unbelievable in the 70s,” he recalls.

“Sandy Shields was first team manager when I broke in, before Brian Halliday took over. He built a very good team and obviously a number of players went across the water under him.

“Personally I think played in seven Irish Cup semi-finals including the replays. It just wasn’t to be, in getting to a final and that probably summed up that era for us.”

After moving to the full-time game with Coventry City, it was on to midlands rivals Birmingham – where he turned out 137 times for the club. La Liga new boys Celta Vigo then came calling, and it was there he was bestowed with the division’s best newcomer accolade – beating Gary Lineker, who had just arrived at Barcelona.

Hagan recalls his time at the top of the game in typical modesty that has earned him the title of ‘Gentleman Jim’ from those who knew him best.

“Playing in the old First Division in England against some of the top players, I did think ‘what am I doing on same pitch’ at times,” he said.

“There wasn’t the same coverage in those days, but you still saw those guys on TV and in the magazines. Eventually you realise they are just people like everyone else though.

“Going to grounds like Anfield, Highbury and White Hart Lane was special. I remember the days at Sandy Bay as youngsters we pretended we were playing at those grounds!

“It was up another level again in Spain, where you were playing at internationally known stadiums.”

It was during his time in the professional game that Jim lined-up alongside one of tonight’s guests, Mark Hateley, not once but twice.

Jim takes up the story: “Mark was an apprentice at Coventry when I was there.

“He made an impression as a youngster, because he wasn’t afraid to put himself around and had a great left foot as well. Jimmy Hill, Coventry’s chairman at the time, also had the franchise for Detroit Express in America, and to help them out he sent five of us over for a season in 1980.

“That included Mark and myself and the club thought it would help us to development and it was a great experience. We were well looked after with cars and apartments to stay in and it was good to experience a difficult culture for a while.”

Having played on to just shy of his 40th birthday, Jim has since been able to pass on his experience in a number of coaching roles. Fast forward to 2018, and although Jim now resides in the Costa del Sol, he is well up to speed with everything that is going on back home.

“I’m good friends with Gareth Clements and if anyone was made to be a Chairman he is,” he added.

“I’m so impressed with how professionally things are done, and all that has happened at the club, but I’m not surprised with Gareth involved, because that’s the way he approaches things.

“Everything being brought into the 21st century and with the backing of Kenny Bruce it is so good to see. Things are being done right with the youth structure, something I tried a while back.

“To see the numbers of people going to the games is brilliant too, it’s clear the whole town is buying into it. There are people at the club who have seen good and bad times, but things are moving forward and I just I wish I was born about 40 years later so that I could pull on the boots myself!”

The ambitions of the club have been well documented over the last year, but what does the man who has been associated with the club since 1974 think is possible?

“Anything that I have read would indicate that the objective is to become the best, and the club is doing everything they can to get there,” he said.

“Things don’t happen overnight, but looking at squad they should be able to get up and then from there it is about cementing yourself in the top flight again and you can start to look a Europe.

“With everything going on at the club it means others treat Larne as their cup final, but they seem to doing very well coping with that.

“If you look at Crusaders and where they have come from and got to now it shows you what can be done in Irish League football. With the backing Larne has, something like that could well be achieved a bit quicker that even they have done it.

“I’m delighted to see it all unfold. The whole town is pulling in the same direction and that is the key.

“When you have that, then anything is possible.”