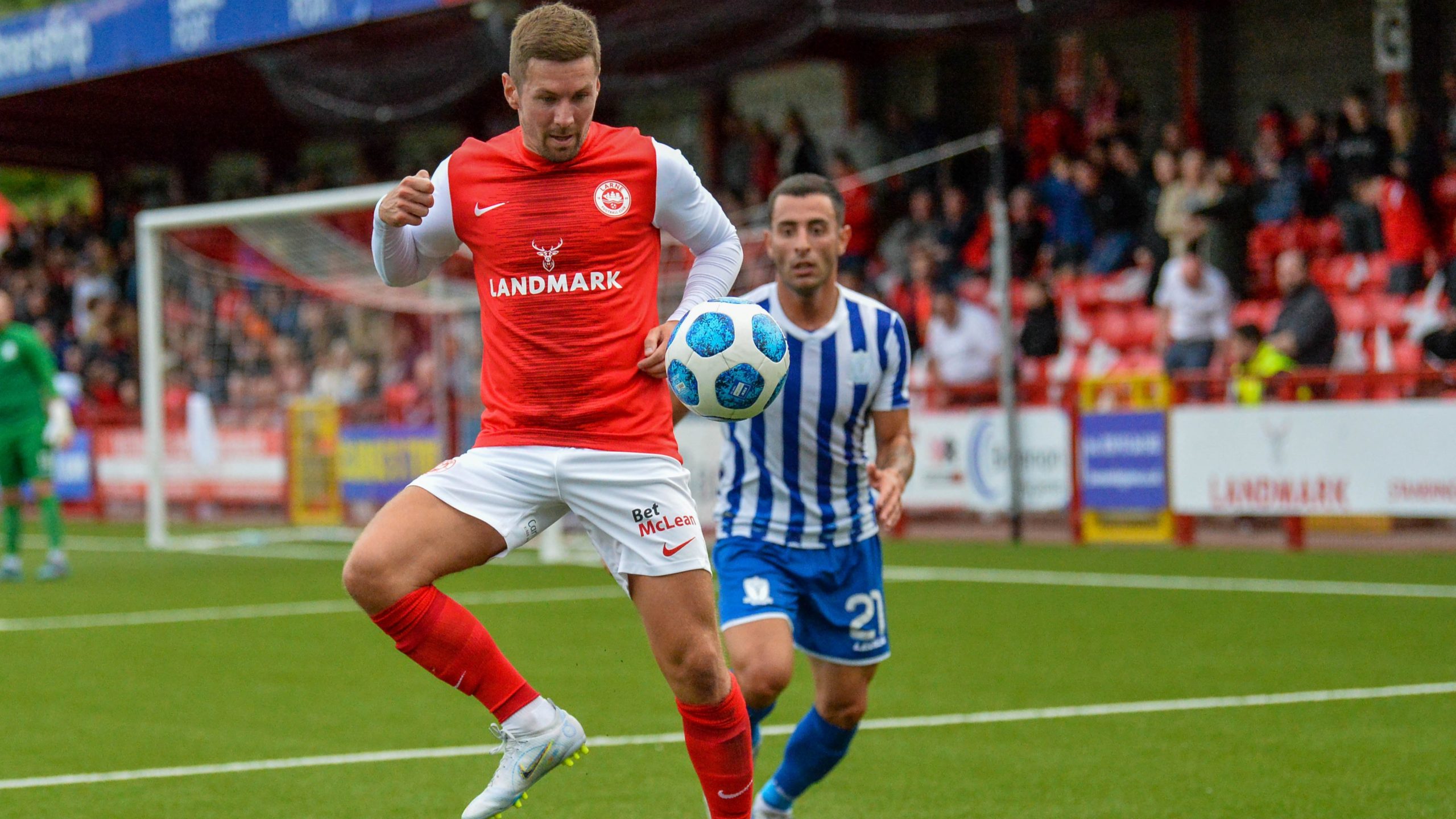 As we are now nearly two weeks into September, ‘The Inver Read’, our new Monthly Magazine has proved to be a popular addition to a matchday experience for many supporters.

Below we take an in-depth, exclusive look at the ‘Life Before Larne’ article with Daniel Kearns, written by Mark Strange from this month’s magazine:

“You could write a book about my career!” Daniel Kearns has a wealth of experience on both sides of the Irish Sea and has already become a key member of Tiernan Lynch’s squad.

A native of West Belfast, Kearns started his playing career with his local side St. Oliver Plunkett’s before a move to Lisburn Youth. “I had a few trials in England but eventually I signed with West Ham just before my 16th birthday.” The Hammers, of course, have one of the most famed academies in world football and Kearns had only good things to say about his time in East London.

“It was an incredible set-up and myself and everyone else who was there were treated extremely well. There were a few boys in my age group and slightly older who have gone on to have top careers such as Junior Stanislas and Freddie Sears. I also played a bit with Jack Collison and he was quality. It is a real shame that he had to retire so young due to injuries.” After his time in claret and blue came to an end at age of 19 in 2010, Kearns had a few options in England but it was Dundalk manager Ian Foster who reached out to him for a trial offer and Kearns impressed enough to earn himself a contract.

Following an impressive debut season, Kearns was selected for a League of Ireland All-Star team that took on his boyhood team Celtic at the Aviva Stadium. Despite being on the wrong end of a 5-0 score line, the Larne number 7 caught the eye again and earned himself a move back to England with Peterborough.

The Posh had just been promoted to the Championship under Darren Ferguson – son of Sir Alex, of course. Just like with West Ham, Kearns has only good things to say about the club where he spent the guts of three seasons. During that time, he also had loan spells across the Football League, firstly with York City of League 2. “I was 19 when I went to York and it was really my first taste of senior English football. I played under Gary Mills and really enjoyed working with him.”

After another couple of loan spells with Rotherham and Chesterfield, Kearns made the permanent switch to Carlisle United in 2014 under the tutelage of Graham Kavanagh. However, Kavanagh only lasted six games after the former Ireland youth international’s arrival. The Cumbrians are (in)famous for their proximity to the Scottish border and, as a result, their lack of proximity to just about every team they play!

Kearns laughs as he recalls five or six hour bus trips almost every other weekend and how they weren’t quite private charter flights a la the Premier League! Following Kavanagh’s exit, Kearns knew his time at Brunton Park was coming to an end. “It was a bit of a tough time for me at Carlisle and I just wanted to get back to enjoying my football again so I joined Glenavon under Gary Hamilton and Windy Miller. I was only there for about six months but I thoroughly enjoyed it and got back to just playing football.”

It was after his stint at Mourneview Park that Kearns heard from a familiar source when Dave Robertson – then manager of Sligo Rovers – got in touch. “Dave was an academy coach when I first joined Peterborough before he made his way up to the manager’s job and he contacted me about coming down to Sligo.”

Sligo was another club that the Inver Reds’ forward enjoyed his time at, despite having a couple of injuries that meant he didn’t quite play as often as he would have liked. “I picked up quite a serious quad injury towards the end of my time at Peterborough that bothered me for a few years afterwards and it was a bit of a nightmare at times at Sligo but they are a great wee club with a fantastic set-up.”

The Bit O’Red made the headlines this summer with a famous European run that ultimately culminated in elimination from the Conference League third qualifying round by Norwegian outfit Viking but not before a famous second round victory over Motherwell and a first round success over none other than Bala Town. A third round exit after an historic second round win preceded by knocking out Bala… where have we heard that before?

After his time at Sligo came to an end, Kearns made a move to Limerick at a time when the club was in serious financial difficulty and it was not a fun experience. Regular readers of this series will recall Lee Lynch discussing the trauma at his hometown club and Kearns echoes this. The club has since folded and reformed in the Second Division as Treaty United.

The West Belfast native landed on his feet after leaving Limerick and was invited to Linfield by David Healy and had a successful spell at Windsor Park but with niggling injuries and lack of first-team minutes, Kearns had Healy’s blessing to make the move to Solitude. Kearns cannot speak highly enough of his time in North Belfast as he was part of the team who pushed his former club Linfield all the way for the title last season while playing some of the most attractive football in the league.

When he first joined, it was during the disruption of COVID and while still shaking off his fitness problems, took some time to settle but when he did and the Reds clicked, they were a force to be reckoned with.

Speaking on his move to Inver Park, Kearns has slotted in well to Tiernan Lynch’s new-look forward line early in the season. Despite the obvious disappointment of Europe, he is extremely optimistic for the season ahead and being joined by his former Cliftonville teammates Aaron Donnelly and Paul O’Neill as well as a host of other quality signings, the Inver Park faithful will be looking forward to watching this side click into gear all season long.

The Inver Read can be purchased at any time through our online club shop by CLICKING HERE or can alternatively be purchased at CS Sports on the Main Street in the Town centre.