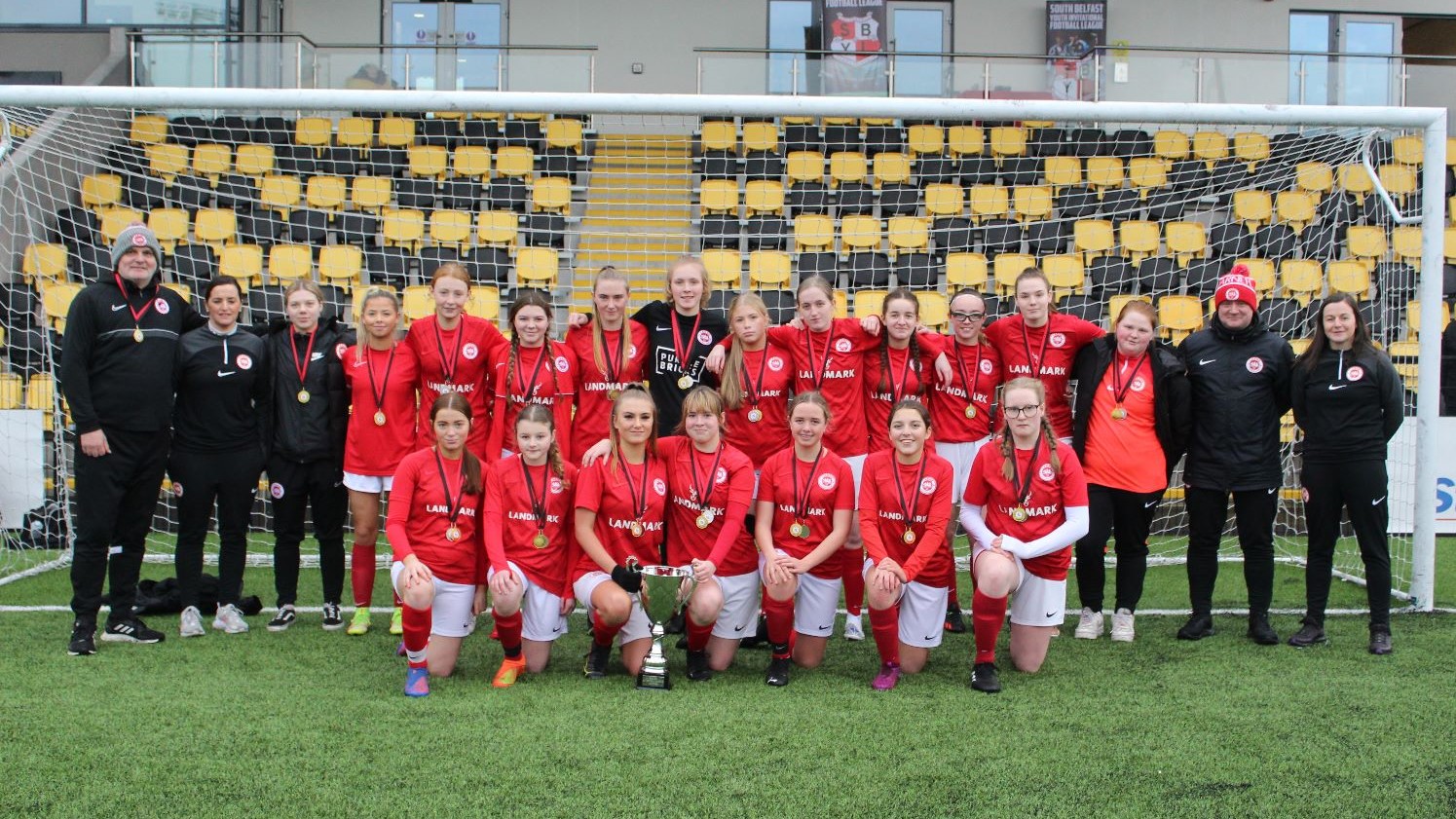 The Larne 2012 Girls played their first match in the South Belfast Youth League on Saturday which was their first competitive game together. They came up against a strong Rosario side and came out on the wrong end of the scoreline, but this was only after winning the first half.

The side is still very raw with some girls still learning the rules of the game and for others it was their first match with an official referee having only trained and played friendlies together. The size of the pitch was also something that this young and promising team have to get used to.

That first-half goal was scored by Amber O’Toole. It was a lovely strike from all of 20 yards which flew past the goalkeeper into the top corner. As well as the great strike, the build-up play was a joy to watch with the girls playing some great passing football and running some lovely lines which really pleased the coaching team as they could see things that were worked on in training coming to the fore.

Unfortunately, the second half did not go to plan as the bigger pitch made for some tired legs and miscommunication at the back allowed Rosario to come back into proceedings. A couple of goals in quick succession took the wind out of Larne’s sails but they continued to play football the way they have been in training which was good to watch.

Some more late goals put some gloss on the result as the Rosario number 9 and centre half impressed and made things difficult for Larne.

A lot of positives for everyone to take away from the game and lessons to be learned to which will be worked on in training. An enjoyable and positive first ever competitive game for the 2012 girls.

The U12 girls played out an entertaining draw with Ballynagross. Larne led at half-time with a lovely strike from Sophie Aiston who was a threat all game. Ballynagross were not allowed to threaten in the first half with the Larne defence keeping them at bay and they had another good chance just before half-time from Kacey Clarke but the ‘keeper made a good save.

The second half started much the same with the Larne girls on the front foot. Sophie had more chances as did Kacey, Faith, and Gemma but they were caught out from a corner. The girls didn’t react quick enough to a corner and allowed Ballynagross to equalise. Larne didn’t let this put their heads down as they continued to play nice attacking football. The girls worked hard but almost conceded as late winner as Ballynagross broke away only for Macy Brennan to make a fantastic save to preserve the point.

The Larne U17 girls faced a physical and attacking St. Oliver Plunkett side in the final of the South Belfast Divisional Cup Final and went to-to-toe with them before falling agonisingly on penalties. Larne started out the better side and took a deserved lead after ten minutes through Morgan Beattie. The Inver Women were not giving Plunkett’s an inch of pace but just on the stroke of half-time their number 10 scored a fortunate effort from the edge of the box with meant things were even going into the break.

In the second-half the game turned on its head with Plunkett’s on the front foot and most of the play being in the Larne half. The Inver Women struggled to make any inroads and were camped in their own half but there were to be no further goals thanks, in large part, to great work in goal from Kate Smith.

In the shootout, Larne scored their first three penalties but, unfortunately, missed their last two, meaning that St. Oliver Plunkett won narrowly in the shootout to take the trophy. However, Larne did not leave without silverware as they were crowned South Belfast Youth League champions. This was the second consecutive year that the girls have won the league and appeared in the cup final after last year’s league and cup double so, despite the disappointment of the shootout defeat, there was plenty to be happy about.

The girls gave their all and played for the badge right until the end.