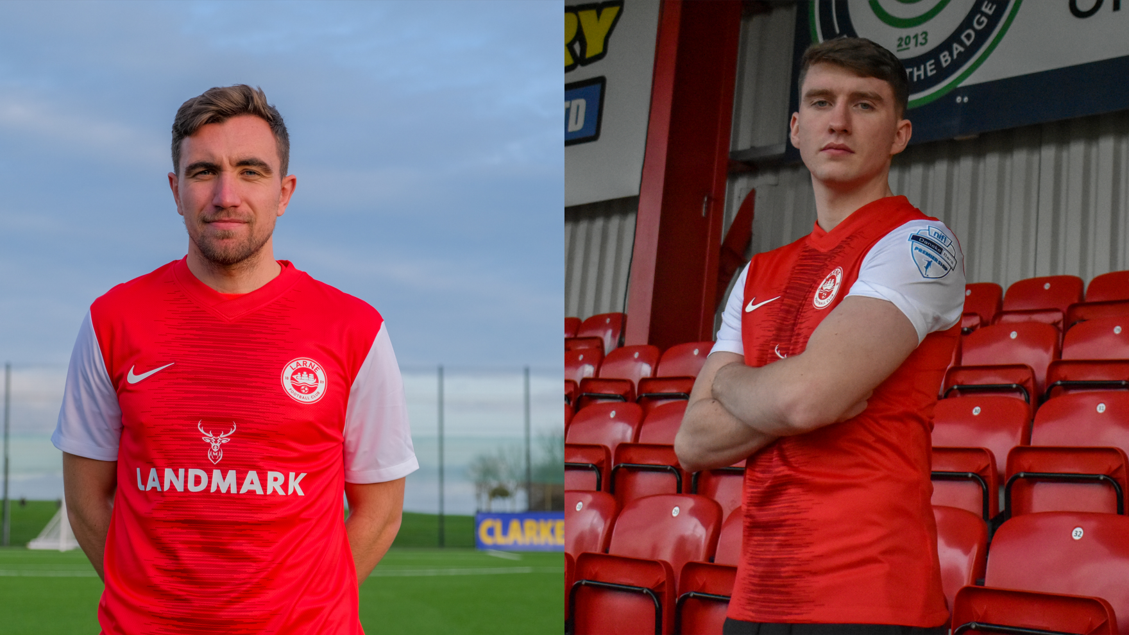 We are delighted to announce the arrival of Joe Thomson and Micheal Glynn from Derry City, with Ben Doherty moving in the opposite direction in a deal which includes an undisclosed transfer fee for Larne.

Joe Thomson is a 25-year-old Scottish central midfielder, who has spent the last two seasons at the Brandywell, helping City to back-to-back European Qualification as well as last season’s FAI Cup triumph.

He has also been capped at every age group for Scotland from under-15’s through to the under-21 squad, during spells at Livingston, Queen of the South and Dunfermline, where he made almost 100 appearances in Scottish League football.

Micheal Glynn, a left-sided player, also comes to the club from the Brandywell, but is no stranger in Irish League circles having been on loan at Dungannon Swifts last season.

The 20-year-old then arrived at Glenavon last summer, scoring against Larne at Mourneview Park in August, as one of three Premiership goals scored for the Lurgan Blues.

“This is a bit of a unique transfer, in that both clubs are getting players they have been tracking for some time,” he said.

“Joe is coming into his peak years and has shown his quality whether that be in Scotland or in the League of Ireland, where played more than 70 times is a very strong Derry City team.

“We are looking forward to him complementing what we have in the middle of the park and giving us an extra dimension from this point onwards.

“Micheal has caught the eye in the Irish League over the last 18 months and has done very well for Glenavon this season.

“At just 20 he is still developing as a player and we’re looking forward to him doing that with us.”

Going in the opposite direction is Ben Doherty, who re-joins his hometown club after 18 months at Inver Park, after signing for Larne from Coleraine in August 2021.

“I have nothing but praise for Ben, he has been a top professional during his time at the club,” said Tiernan Lynch.

“If Derry hadn’t come in for him, Ben would certainly still be a Larne player. The lure of rejoining his hometown was a strong pull for him and one we can understand, especially the travelling which he has done over this last year and a half.

“Ben worked extremely hard during his time here and we thank him for his efforts. He goes with our best wishes.”

Joe and Micheal’s signings complete a busy week on the transfer front at Inver Park, coming on the back of the arrivals of Jamie Pardington and BJ Banda.